College Awareness Week may be months away – but the CAW team has been busy sending ripples out into the world. On April 13th we were sharing education stories at the NAPD Further Education & Training Conference in the Marker Hotel. April 21st saw us at the RDS for AIB Build a Bank, where the winners were Pretty Little Bankers from the Ursuline Secondary School in Waterford. Maith sibh a cailíní!  On May 10th we were at the YSI Showcase at Citywest, to see Portmarnock Community School become Young Social Innovators of the Year with their project ‘Global Citizens Mapping the Future’. Well done! It was very encouraging for CAW to see the great commitment by students and those who facilitate them at all three events. 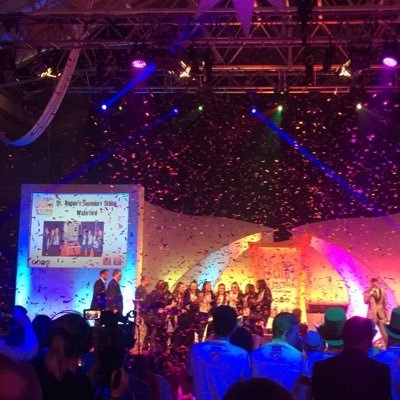 Pretty Little Bankers from the Ursuline Waterford win the AIB Build a Bank challenge – in a hail of confetti!